TIM HORTONS BEEFS UP ITS MENU WITH STEAK

TIM HORTONS BEEFS UP ITS MENU WITH STEAK 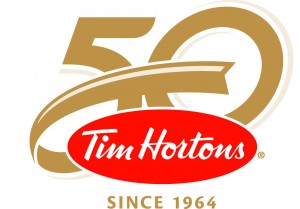 –Top-selling Steak & Cheese Panini is back and here to stay, helping Tim Hortons move the needle towards lunch leadership –

OAKVILLE, ON – October 1, 2014 – Canadians love steak – they consume an average of 44 pounds of beef per person per year[1].Now, they can have steak sourced from 100 per cent Canadian beef at Tim Hortons no matter when hunger hits. Starting today, Tim Hortons is permanently bringing back its best-selling Steak & Cheese Panini, and offering a new Chipotle-flavoured option. In addition, Tim Hortons is introducing for a limited time a new Grilled Steak & Egg Breakfast Sandwich.

The launch of breakfast and lunch steak sandwiches at Tim Hortons further solidifies the company’s leadership position in breakfast and its growing share of the lunch category. Tim Hortons has grown its lunch traffic over the last six years by five per cent, surpassing the overall Quick Service Restaurant (QSR) segment lunch growth[2]. In addition, steak sandwiches have grown by more than 15 per cent at QSRs over the past year[3].

“Tim Hortons is continuing our play to become Canada’s lunch leader by bringing quality steak menu items to our guests like the Steak & Cheese Panini and the new Grilled Steak and Egg Breakfast Sandwich made with 100 per cent Canadian Beef. According to the NPD Group, steak sandwiches are the fastest-growing category in quick-service restaurants, and last year our limited-time Steak & Cheese Panini became our number one selling sandwich,” said Tammy Martin, Vice President Marketing, Food and Merchandise, Tim Hortons. “It was clear that we not only needed to bring back the original Steak & Cheese Panini for good, but also complement it with a bolder Chipotle option and seize the opportunity to introduce steak at breakfast.All three of these sandwiches are hearty meals that feature steak sourced from 100 per cent Canadian beef that will easily satisfy a steak lover’s craving.”

To celebrate the launch of steak sandwiches at breakfast and lunch, Tim Hortons is asking social media fans to enter to win “Steakholder” meetings ­– where ordinary meetings at the office, at home, or even at the farm, are transformed with a Steak & Cheese Panini for all involved. Starting at 10 a.m. on October 1, 2014, to October 8, 2014, Tim Hortons fans across Canada can tweet at @TimHortons why their colleagues deserve a “Steakholder” lunch meeting, using #TimsSteakholder. On October 10, 2014, 10 randomly selected entrants will win a “100 per cent Canadian Steakholder” lunch meeting delivery, including Steak & Cheese Panini combos for all participants. Social media fans are also encouraged to visit TimsHortons.com/SteakHolder to invite friends to get down to steak business and head to Tim Hortons for their own “Steakholder” meeting.
[1] Canada Beef Inc. Canada’s Beef Industry Fast Facts. June 2012

Canada Beef is the cattle producer-funded and run organization responsible for domestic and international beef and veal market development. It has offices in Canada, Mexico, Japan, China and Taiwan. Canada Beef works to foster loyalty to the Canadian beef brand and build strong relationships with trade customers and partners. These efforts increase demand for Canadian beef and the value producers receive for their cattle.

Tim Hortons is one of the largest publicly-traded restaurant chains in North America based on market capitalization, and the largest in Canada. Operating in the quick service segment of the restaurant industry, Tim Hortons appeals to a broad range of consumer tastes, with a menu that includes premium coffee, hot and cold specialty drinks (including lattes, cappuccinos and espresso shots), specialty teas and fruit smoothies, fresh baked goods, grilled Panini and classic sandwiches, wraps, soups, prepared foods and other food products. As of June 29,

2014, Tim Hortons had 4,546 systemwide restaurants, including 3,630 in Canada, 866 in the United States and 50 in the Gulf Cooperation Council. More information about the Company is available at www.timhortons.com.

For further information or to arrange an interview, please contact: