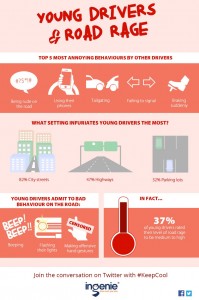 – Take a quiz at https://www.ingenie.ca/keep-cool to Rate Your Road Rage –

– View the infographic at https://www.ingenie.ca/wp-content/uploads/2015/06/Keepcool-ingenie-canada.jpg –

TORONTO (July 6, 2015) – Young drivers in Ontario have plenty of gripes about other drivers on the road, and tempers could flare this summer as construction related delays add to driver frustration. According to the ingenie Road Rage Report, summer is the most infuriating driving season; 58% of young drivers are frustrated by construction related delays in the summer while only 18% are bothered by bad weather in the winter.

“Nobody likes traffic delays and cranky drivers can lead to conflict on the road. But, as a driver your top priority needs to be safety. It’s important not to let emotions get the best of you,” says Lorie Phair, CEO of ingenie Canada, a telematics based auto insurance provider for Ontario drivers aged 16 to 24. “Keep a cool head, and don’t let outside influences take over. Instead, concentrate on what you can control, which is your own driving.”

Young Ontario drivers name the top 5 annoying behaviours by other drivers as:

Tempers flare fast – even in the drive-thru

While Ontario drivers get mad at rude drivers, they don’t deny adding to the inhospitable environment on the road. Many admit they have taken frustration out on other drivers with behaviour such as:

“As a driver, you are responsible for controlling your own vehicle. It’s an important duty that requires your complete attention,” says Phair. “While you may become annoyed by other drivers’ bad habits, it’s not your responsibility to reprimand them. Don’t get emotional, just focus on the task at hand – arriving at your destination safely.”

Take a 10 question quiz at https://www.ingenie.ca/keep-cool to rate your road rage and find out how well you keep your cool while driving. Follow the conversation about Road Rage online using the hashtag #keepcool.

ingenie is an innovative young driver insurance brand that uses telematics technology to reward safe driving with savings. ingenie builds a picture of a driver’s individual style, awareness and safety on the road, rewarding those who drive well with up to an extra 25% Good Driving Discount and helping those who need improvement become safer. ingenie was awarded the prestigious Prince Michael International Road Safety Award in 2013, in recognition of its work to help make young drivers safer on the road. Among a number of industry awards, ingenie has won best start-up at the 2014 British Insurance Awards and insurance innovation of the year at the Insurance Times Awards. To learn more about ingenie, or to get an online quote, visit www.ingenie.ca or call 184-ingenie-1 (1-844-643-6431).

About the ingenie Road Rage Report

Results are based on an online survey conducted for ingenie by Student Life Network between May 25 to May 26, 2015. A total of 604 interviews were collected from Ontario students who are licensed drivers.

You might also like
One of the following
Insurance Bureau of Canada selects Paradigm as AOR
WILD READING ADVENTURES ALL SUMMER LONG FROM TD SUMMER READING CLUB
SIMPLIFY AND BE HAPPY? ABSOLUTELY, SAY 92% OF CANADIAN MOMS