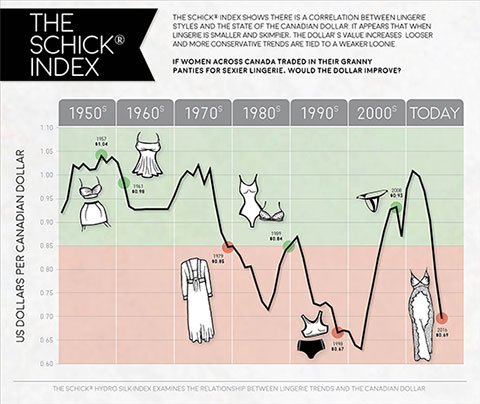 TORONTO, ON – February 9, 2016 – Full-coverage panties are taking over the thong as the dominant trend this year in women’s lingerie, but bigger briefs may not be the most fiscally responsible choice. The loonie has been in a slump since the middle of 2014, and history suggests a correlation between sexier underwear and the strength of the dollar. From the booming ’50s glamorous corsets à la Bettie Page to the sensual silk, lace and marabou of the ’60s to the unforgettable ’80s thong and high-cut bodysuits, there’s evidence that a rising dollar has been in sync with less demure undergarment trends.

There is a correlation between fashion and the state of the economy. The Canadian dollar was strong in the ’50s and the start of the ’60s, it improved in the latter half of the ’80s, and, as we know was strong again in the 2000s. It would appear that lingerie trends function similar to the well-known Hemline Theory, which suggests that as hemlines go up, so does the stock market. Given the state of the Canadian loonie, women may wish to forgo the briefs and get cheeky again to help the dollar rebound in 2016.

“Canadian women may have rejoiced when the comfy granny panty became fashionable again, but this might be one trend worth taking a pass on. While we don’t know if lacy and racy lingerie leads or indicates the strength of the loonie, it’s worth testing out,” says Christine Jew, Brand Manager, Schick Hydro Silk. “Based on the correlation throughout time, you have to wonder: if women across Canada traded in their granny panties for sexier lingerie, would the dollar improve?”

To show the correlation between underwear and the strength of the dollar over time, Schick Hydro Silk created The Schick Index.

In the early 1960s, a time of accelerated economic growth, the Canadian dollar was valued at approximately $1.03 against the American greenback. At the same time, miniskirts went mainstream while cute, short baby doll dresses were worn as sleepwear and daywear.

Going into the ’70s, long and lean satin looks were popular as the Canadian dollar was sitting at 85 cents – a decline of 17 per cent from the previous decade.

As the economy improved in the mid-Eighties, hemlines rose above the knee and women wore undergarments as casual wear – lacy, cut-out “material-girl” looks and high-cut body suits. After Black Monday, hemlines reflected an economy struggling to recover – long and loose became a fashion staple and ’90s minimalism focused on comfort and style with full coverage bodysuits and athletic-style bras replacing the ’80s lacy lingerie.

After the 2008 financial crisis, boho-chic reflected an economy in recession. In 2015, the loonie lost 14 per cent against a strengthening U.S. dollar and runway looks predict a continuing decline. The granny panty started making a comeback, high-waisted swimwear was all the rage and fashion designers have revived the “out of bed look” literally, with nightgowns skimming the floors from your bedroom to the office.

This year’s spring looks feature long and silky slips similar to those from the 1970s. These floor-length looks can only mean a continued decline for the commodity-dependent Canadian dollar.

Would fashion intervention help the dollar?

“If women are getting ready to show more skin, they can ensure they’re perfectly groomed with the Schick Hydro Silk TrimStyle razor,” says Jew. “Even if lacy lingerie doesn’t help the loonie recover, it might just improve some peoples’ love life.”

The Schick® Hydro Silk TrimStyle® razor and refills are dermatologist tested and available at grocery, drug and mass retail outlets across Canada. The suggested retail price for the razor is $13.99.